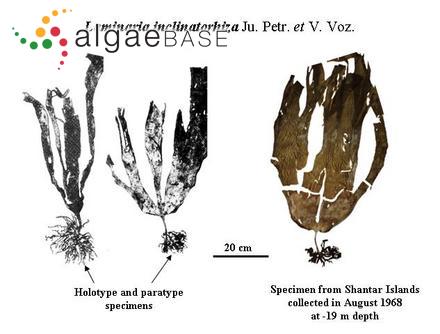 General environment
No habitat entry has yet been made for this entity.

Description
The thalli are of intermediate size, up to 80 cm in total height. They consist of an entire or dissected blade, a terete stipe, and an unusual cone-shaped rhizoidal holdfast. The blades reach 74 cm in length and are rounded to elongate-elliptical in shape. They are flat or concave at the base and often deeply dissected. The medulla occupies about 22% of the blade thickness. The blade cortex bears numerous mucilage ducts that are large (80 x 120 µm) and close to one another (20-180 µm apart). They distance from the blade surface to the center of a mucilaginous duct to the medulla is in a ratio of 1:2.1 to 1:2.5. Mucilaginous ducts and lacunae are absent from both the stipe and holdfast. The stipe is erect, 10 mm in diameter and 30-70 mm long. The holdfast contains whorls of haptera that are initiated obliquely from the stipe. As they grow, they extend downward for about 4 cm and are often unbranched except at their tips where they weakly divide to provide attachment. This creates a cone-shaped profile to the holdfast that can be nearly as tall as the stipe is long. The maximum width (5.5-6 mm) and thickness (up to 4.2 mm) occurs in the middle of the haptera and they are narrowest near the stipe (to 2.7 mm). The haptera are fragile and easily break off, especially in herbarium samples. Sporangia are found on the blades from late July-September. They develop on both surfaces of the blade and the soral areas conicide in location. (Translated from Russian by O.N. Selivanova)

Habitat
On rocks at depths of -2 to -19 m, often in silty habitats.


Similar species
This species differs from L. digitata and other similar species by the morphology of the holdfast and by the location of the sporangial sori. L. digitata is absent from the Sea of Okhotsk, and it is likely that authors recording this species were actually referring to either L. appressizhiza or L. inclinatorhiza.

Selivanova, O.N., Zhigadlova, G.G. & Hansen, G.I. (2007). Revision of the systematics of algae in the order Laminariales (Phaeophyta) from the Far-Eastern Seas of Russia on the basis of molecular-phylogenetic data. Russian Journal of Marine Biology 33: 278-289.

Accesses: This record has been accessed by users 2236 times since it was created.

Linking to this page: http://www.algaebase.org/search/species/detail/?species_id=131557