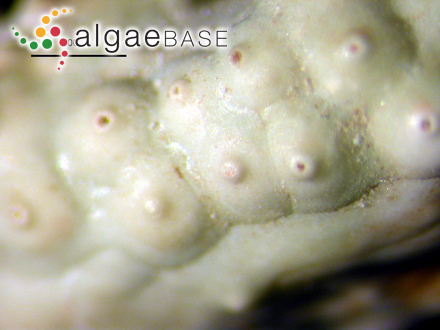 Nomenclatural notes
Illegitimate: Woelkering et al. (2005: 87) note: "The name Lithothamnion mamillosum Hauck (1883a) is based on a non-fossil type and thus has priority over [the fossil species] L. mamillosum Gümbel (1871: 41) which is based on a fossil type (see ICBN Art. 11.7, Note 4)].". However, G. Furnari (e-mail, 3 March 2017) writes: "In 2005, Woelkerling et al., correctly referred to the Saint Louis Code of 2000 in which Art. 11.7 Note 4 gave reason to that interpretation. But, the Vienna Code of 2006 Art. 11.8 Note 4 and relative examples, gave a different rule as concerns homonymy. Such an interpretation was confirmed in ICN (Melbourne Code) of 2012 Art. 11.8 Note 5 and relative examples 35-37. Therefore, Lithothamnion mamillosum Hauck is illegitimate being a later homonym of L. mamillosum Gümbel and L. hauckii Rothpletz is a legitimate new name. Consequently, all combination based on L. mamillosum Hauck are illegitimate, while those based on L. hauckii Rothpletz, are legitimate. Of course, L. hauckii Foslie is illegitimate being a later homonym of L. hauckii Rothpletz." - (3 Mar 2017) - M.D. Guiry

Accesses: This record has been accessed by users 21 times since it was created.

Linking to this page: http://www.algaebase.org/search/species/detail/?species_id=155715