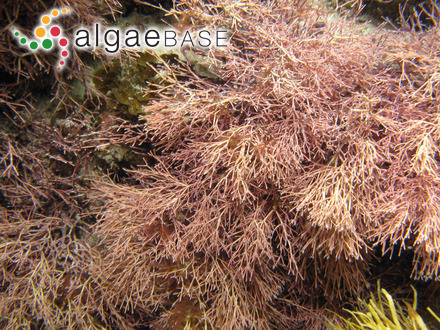 Published in: Harvey, W.H. (1855). Some account of the marine botany of the colony of western Australia. Transactions of the Royal Irish Academy 22: 525-566.

Type information
Syntype localities: "King George's Sound and Rottnest, common, 218" [Western Australia] (Harvey 1855: 547). Lectotype: Harvey; TCD (Womersley & Johansen 1996: 288). Notes: Womersley & Johansen in Womersley (1996: 288) note that A. gracilis was described from “King George’s Sound and Rottnest”, based on Harvey’s Travelling Set 218, that no specimens from King George Sound were located in TCD in 1952, and that Harvey'’s 218 from Rottnest I. (the lectotype) is in fragments. They also noted that there were three good specimens from “Swan River” in TCD. The badly fragmented lectotype is shown at http://plants.jstor.org/specimen/tcd0011881 (Harvey et al. 2013: 112).

Accesses: This record has been accessed by users 1748 times since it was created.

Linking to this page: http://www.algaebase.org/search/species/detail/?species_id=2088