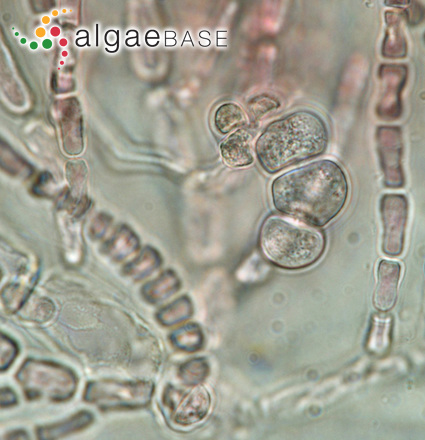 Type Information
Sea Coast: Major Velly [probably south coast of England]; (Withering 1796: 127) Lectotype: undated; BM; (Irvine 1983: 12) Notes: The Velley specimen accepted provisionally as lectotype is unlocalised. Thomas Velley (1748?–1806), matriculated from St. John's College, Oxford, on 19 March 1766, and graduated B.C.L. in 1772. He became lieutenant-colonel of the Oxford militia, and was made D.C.L. of the university in 1787. He resided for many years at Bath, and devoted himself to botany, and especially to the study of algæ, collecting chiefly along the south coast. He was the friend and correspondent of Sir James Edward Smith, Dawson Turner , John Stackhouse, and became a fellow of the Linnean Society in 1792. Jumping from a runaway stage-coach at Reading on 6 June 1806, he fell and suffered a concussion of the brain, from which he died on 8 June. His extensive and annotated herbarium, illustrated by numerous dissections and microscopic drawings of grasses and other flowering plants, and especially of algæ, which occupy eight folio volumes, was purchased from his widow by William Roscoe for the Liverpool Botanical Garden. Sir James Edward Smith in 1798 gave the name Velleia, in his honour, to an Australasian genus of flowering plants. Velley's only independent work was ‘Coloured Figures of Marine Plants found on the Southern Coast of England, illustrated with Descriptions …,’ London, 1795, folio, pp. 38, with five coloured plates. He is credited with four papers in the Royal Society's ‘Catalogue’ (vi. 131), of which the last is, however, the work of Sir J. E. Smith [Extracted from http://en.wikisource.org/wiki/Velley,_Thomas_(DNB00)].

Linking to this page: https://www.algaebase.org/search/species/detail/?species_id=129