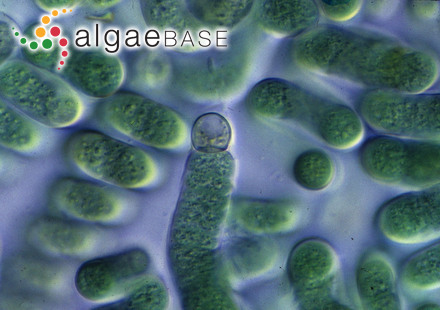 Type species
This is the type species (holotype) of the genus Spirirestis.

General environment
This is a terrestrial species.

Description
Colony softly mounded on agar, with slightly irregular margins, not tufted, dark blue-green, maintaining its colour at four months; the only evidence of colour change to olive or ochre occurring with cell death in drying, older cultures. Colony compact, with densely arranged filaments, but no evidence of external mucilage production. Although filaments can be seen within the colony at 30 x magnification, filaments do not extend horizontally or vertically from the colony. Colony morphology is similar on both Bolds Basal and Z-8 media.

Filaments forming tight, regular spirals which can be seen to taper slightly in young cultures. Filaments 6-20 µm in diameter; spirals 16-28 µm in diameter at their widest point, tapered end of spirals about 75-80% of the maximum diameter; distance between regular spirals 8-12(-16) µm. Some filaments more loosely coiled, or even extended; these filaments increasing in frequency in older cultures. Both single and double false branching occasionally observed in more loosely coiled or extended filaments, but not in tightly spiraled filaments. False branching usually distant from the heterocytes. Sheath firm, usually colourless, occasionally golden to brown, thin in young cultures becoming thicker and lamellated in older cultures, 1-4 µm thick. Trichomes not to slightly constricted at the crosswalls, more commonly constricted in older cultures and in loosely coiled or extended filaments, 5.5-14.0 µm in diameter.

Accesses: This record has been accessed by users 774 times since it was created.

Linking to this page: http://www.algaebase.org/search/species/detail/?species_id=129285