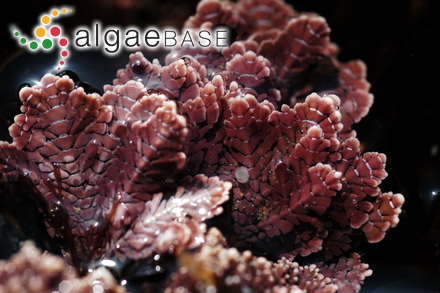 Type species
This is the type species (holotype) of the genus Bossiella.

Distributional notes
Confirmed by DNA sequence from Haida Gwaii, British Columbia, Canada south to Pacific Grove, Monterey Co., California. Within this range the species is disjunct with distinct populations in Haida Gwaii and Vancouver Island, British Columbia, Canada and in California, USA. The report by Stewart (1991) from southern California is Bossiella dichotoma, not B. plumosa; the report by Lindstrom (1977) from Sitka, Alaska is not this species. It is very doubtful that the report by Perestenko (1994) from eastern Russia is B. plumosa. - (29 Nov 2015) - Paul Gabrielson

Verified by: 29 November 2015 by Paul Gabrielson

Accesses: This record has been accessed by users 3912 times since it was created.

Linking to this page: http://www.algaebase.org/search/species/detail/?species_id=4918