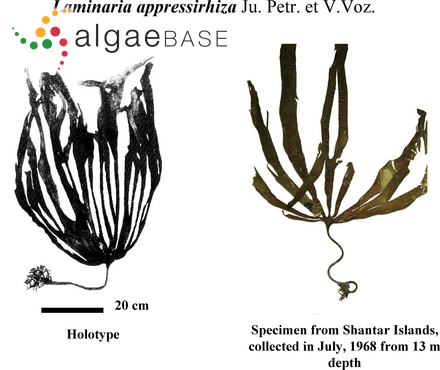 Taxonomic notes
This species is similar in morphology to Laminaria digitata (L.) Lamour, but it differs from this and other Laminaria species in having sporangia restricted to one surface of the blade and in having mucilage ducts medially placed and widely spaced in the inner cortex of the blade but absent from the stipe. We anticipate that this species will remain in the genus Laminaria in the taxonomy taxonomic scheme recently proposed by Lane et al. (2006). - (19 Sep 2006) -

Distributional notes
Grows on bedrock and boulders in the subtidal down to -15 m and rarely in the low intertidal. Greatest abundance is at -7 to -10 m. Known from the Sea of Okhotsk on northern and north-eastern coasts and Shantar Islands. - (19 Sep 2006) -

Description
Thalli reach up to 140 cm in height and consist of a rhizoidal holdfast, terete stipe, and a rounded to oval, very highly dissected blade. The blades average 0.5 to 1 meter in length, and freshly collected blades are convoluted with the split sections appearing almost tubular due to inrolling. The stipe is erect, about 10 mm in diameter, and varies in length from 4 cm in intertidal specimens to 15-28 cm in subtidal plants. The holdfast bears rhizoidal haptera that are rigid and grow at nearly right angles to the stipe. They branch repeatedly at intervals of up to 10 mm and gradually narrow toward their tips. The blade or lamina consists of a single layered meristoderm, a cortex, and a medulla. The medulla occupies from 40-60 % of the blade thickness. Mucilage ducts are present in the blade, and they are large (40-56 x 80-100 µm) and widely spaced (250-350 µm apart). The distance ratio of the blade surface to the center of the mucilaginous duct to the medulla varies from 1: 1.1 to 1: 2.5. Mucilage ducts are absent from the stipe and holdfast. Sporangia are formed from August-September and occur only on one surface of the lamina causing an inrolling away from the sorus in the sections of the blade that are fertile. Translated from Russian by O.N. Selivanova.

Habitat
Grows on bedrock and boulders in the subtidal down to -15 m and rarely in the low intertidal. Greatest abundance is at -7 to -10 m.

Selivanova, O.N., Zhigadlova, G.G. & Hansen, G.I. (2007). Revision of the systematics of algae in the order Laminariales (Phaeophyta) from the Far-Eastern Seas of Russia on the basis of molecular-phylogenetic data. Russian Journal of Marine Biology 33: 278-289.

Accesses: This record has been accessed by users 3942 times since it was created.

Linking to this page: http://www.algaebase.org/search/species/detail/?species_id=131433